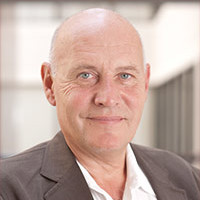 Flemming received his PhD in Psychology 1982 from Gothenburg University, Sweden and became associate professor in Organizational Psychology 1989. 1998 he was appointed full professor at the School of Technology Management and Economics, Chalmers University of Technology, Gothenburg Sweden. Since 2007 he is also a faculty member of the Politecnico di Milano in Italy where he teaches OB for MBAs.
Flemming has been co-founder and director of three large multi disciplinary research centers since 1987 and onwards. FENIX, the third of these was one of Europes largest Management research programs ever (1997-2005). It´s focus was on Management of Industrial R&D and involved 4 MNC partners, executive PhD candidates and an international faculty of about 25 associate and full professors. All three centers have engaged in action research and were financed by both industry and state funding agencies.

Flemming has pursued research mainly on issues such as leadership, change management and the organization of academic and industrial R&D activities. Publication of research in journals such as Harvard Business Review, Journal of Product Innovation Management, R&D Management, Research Policy as well as co-authoring several books. Together with American and Swedish colleagues he authored the book Higher Ambition about leaders creating both economic and social value and published by Harvard Business Press. Based on this book and the research conducted with 35 CEOs across the world he has been cofounding the Center for Higher Ambition Leadership in the US and Sweden. He serves as the chairman of the European center. He is scientifically responsible for the Chalmers School of Entrepreneurship and its masters programs enroll 50 students/year.

In parallel Flemming has worked as a consultant and advisor for international companies for more than 30 years doing leadership development, organizational redesign and strategic change management. For periods of 1-2 years he has been hired temporarily as manager in R&D functions. The major engagements have been to redesign and transform R&D units and assisting top teams on transformational and strategic changes. Consulting engagements also included design and execution of both in-house leadership development programs and multi-client service. In addition to industrial clients (auto, med-tech, pharma and telecom mainly) he has worked with health care organizations and state agencies.

Over the last 10 years Flemming has worked as a land and house developer, receiving several prizes for architecture and sustainability in building and community development.