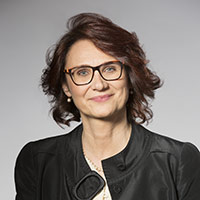 Fiorella Passoni has worked in the communication industry for 25 years, 20 of which have been spent at Edelman. Since 2001, Fiorella has held the position of General Manager for Edelman Italy, which was named Italian Consultancy of the Year by the Holmes Report. The Italian office is also coordinating 17 Edelman affiliates and Fiorella is currently transforming the local operations into a true communications marketing agency and succeeding as one of the most profitable offices in Europe.

In 2013, Fiorella was admitted to the Council for the United States and Italy, a binational non-profit, non-political organization founded in 1983 by Gianni Agnelli and David Rockfeller. The Council aims at fostering closer ties between the United States and Italy and the focus of its membership and activities is economy and finance. Furthermore, Fiorella is a member of the Ruling Companies, a non-profit association aimed at promoting a serious, concrete, up to date management philosophy and an active participant at Deauville Women’s Forum Annual Conferences.