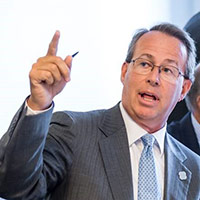 Tim Youmans is Research Director for the Strategic Investor Initiative (SII) at CECP, “The CEO Force for Good,” a “Newman’s Own” non-profit headquartered near Wall St. Tim has been a research scholar at Harvard Business School and in the MIT Sloan School’s Family Leaders with Purpose Program. At Harvard and now MIT Sloan he continues to work closely with Oxford Said Business School Professor Robert G. Eccles. Their research on “Materiality in Corporate Governance …” and on other topics has been featured by The MIT Sloan Management Review, Forbes, The Economist, The Financial Times, Harvard Business School Working Knowledge, The Guardian and The American Bar Association, among many other publications.

Tim has a Master’s Degree in Public Administration and is a Lucius N. Littauer Fellow from the Harvard Kennedy School, and has been an advisor to student-run start-up firms in the Harvard Innovation Lab. After a career in the Coast Guard, Tim spent 25 years in business, the last 17 years running his own consulting firms. He interrupted this consulting practice twice to work full time for a client: first as EVP of a venture funded internet startup and second to run a large family office. Tim has had both governments and corporations as clients across the globe.

He received an MBA from the University of Southern Maine (1992) and a BS in Management from the United States Coast Guard Academy (1981). He was retired from the Coast Guard as Lieutenant in 1989 after serving both afloat and ashore in Alaska, Washington, DC and Maine, and is a service-disabled military veteran.