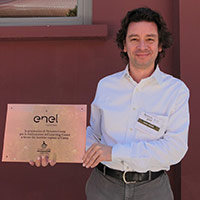 Andrea Valcalda was born in Genoa, Italy in 1965, and graduated in 1992 with a Bachelor’s Degree in Economics.
He joined ENEL in 1996 and has held various positions in the corporate headquarters, from assistant to the President of the company, to member of the Planning and Control Department. After one year as Chief of CEO’s Staff, he was named in 2008 Vice President for Innovation and Environment, where he was responsible for defining the company’s technological roadmap and drawing up the Group’s innovation plan. Since 2013 he has been Head of Environmental Policies and Climate Change until his nomination as Head of ENEL’s Sustainability Department in 2014. He is Managing Director of “Enel Cuore” Foundation.